SAN FRANCISCO — The California Senate passed a bill Monday that would let people stay in their homes who haven’t paid their rent because of the coronavirus, sending it to the state Assembly as lawmakers rush to act before statewide protections expire on Wednesday. 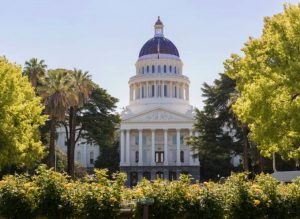 The pandemic has devastated California’s economy, causing millions of people to lose their jobs as the government ordered businesses to close for months to slow the spread of the disease. In April, the Judicial Council of California – the rule-making authority for the state’s court system – halted most eviction and foreclosure proceedings during the pandemic.

But those protections expire on Wednesday, meaning landlords could resume eviction proceedings on tenants who haven’t paid their rent. Lawmakers have been negotiating with Gov. Gavin Newsom for weeks to come up with a bill to extend those protections.

The bill passed Monday by the Senate – the last day of the legislative session – would ban evictions for tenants who did not pay their rent between March 1 and Aug. 31 because of a financial hardship caused by the pandemic. It would also ban evictions for those tenants through Jan. 31, but only if the tenants pay at least 25% of their rent owed during that time.

The bill would still need a vote in the state Assembly later Monday before lawmakers can send it to Newsom, who has said he will sign it into law.

“This measure is simply a six-month bridge for both tenants and landlords,” said Sen. Steven Bradford, a Democrat from Gardena. “This bill by no stretch of the imagination is the end-all, be-all solution to the crisis. It’s a compromise.”

The legislation would not forgive the missed payments. Tenants will still owe the money. Landlords can ask a judge to order the tenant to pay the money, but they can’t ask a judge for an eviction solely for not paying rent in full.

Tenants would have to sign a document, under penalty of perjury, that says they have experienced a financial hardship directly related to COVID-19. Wealthy tenants – defined as earning a salary of at least $100,000 or 130% of the area’s median income, whichever is higher – would have to show proof that they cannot pay.

While many are in favor of the measure both sides say there are negatives. On one side, people are saying it requires renters to pay too much and then on the other side, many landlords believe this will lead to foreclosures.

“Four thousand dollars in debt I am right now!” says Kari Rojas, who fears the worst. Her family went into debt when her husband lost his job due to the pandemic. California lawmakers believe that if signed into law, AB 3088 will provide rent protections for those like Rojas but she’s already in a hole and doesn’t see it changing any time soon. “I’m scared that they’re going to evict me and I have a 16-year-old daughter and my husband and my husband’s mom… we all live here.”

On Facebook many sounded off. One landlord said, “I’m ready to sell my property.” Another said, “My house will be a foreclosure and the tenants will be evicted anyway.” Laura McKinley believes people need to pay more than 25%. “I’ve been through hell this past six months and I’ve managed to pay my rent!”

The bill doesn’t do away with foreclosures and doesn’t offer mortgage forbearance. Rojas believes all of that is needed and as much help as possible for families like hers. “They should give us a break at least until everybody can go back to work,” said Rojas.

Assemblyman David Chiu, a Democrat from San Francisco who authored the measure, says it’s the best lawmakers could do while mustering the two-thirds vote needed to make the bill take effect immediately upon the governor’s signature. He has pledged to work on the issue again when lawmakers return to work in January.